Another Bad Idea That Refuses to Die

The following are my thoughts regarding stock bending and why I'll have nothing to do with it:Any gun of quality manufacture has its cast (be it on, off, or neutral) "built in".  Meaning, the cast starts at the point where the frame meets the wood.  In many instances, the frame straps are actually displaced in the direction appropriate for the stock's intended cast.  In other instances, the frame straps are straight but the cast still originates at the frame/stock juncture because the inletting will be offset.  It also follows that the triggerguard strap will follow in the direction of the stock's cast.Now imagine if you will, bending a cast-off stock into a cast-on (or even neutral) configuration.  With the frame strap/inletting situation being fixed, the only option is to bend the wrist (hand) portion of the stock.  This means also bending the triggerguard tang to match.  For this thought experiment, we will disregard the difficulty in actually bending the wood and the vanishingly slim probability that it will stay in its new configuration.Think about what we end up with in the above scenario: a visibly "S" shaped gun with the head of the stock heading off to the right, bending through the wrist and the balance of the stock veering off to the left.  Things look even worse from the underside of the gun, where the triggerguard's bow and its tang are no longer in line. The drop situation is no better as this is another dimension that is "built in" and the same limitations apply.  The bend would necessarily need to be applied through the wrist and, if the bend is of sufficient magnitude, it will affect the aesthetics of the toe-line of the stock, the pitch of the butt and the fit of the triggerguard and frame tangs.

Stock bending is one of those things that is long accepted but that doesn't mean that it is, or ever was, a good idea.  The wood is, by necessity, being bent through the area of least cross-section and bending entails setting up enormous internal stress in the fiber cells of the wood, both tensile and compressive (tensile on the outside of the bend and compressive on the inside of the bend).  It is these stresses that will, eventually, cause the wood to return to its original state (or close to it).  If the wood is bent far enough that the fiber cells break, the wood will stay in its new configuration but its strength will be greatly diminished.
Bending, or more accurately, attempting to bend a stock that far is a bit like bending your car's body to make it go where it should, rather than altering its wheel alignment.  Bending a stock is a "low cost" expedient with a low probability of long-term success that also entails significant aesthetic compromises.
Posted by Dewey at 1:57:00 PM No comments:

The How and Why of the Rising Bite

A reader recently asked about the benefits of the rising bite and how it works.  I thought that the answer may be of interest generally, hence, its posting here.

Hello D****l,
I appreciate the compliment but I think of myself as much more a student than an expert (there are enough "experts" in this field already).
The rising bite (Rigby and Bissel's patent) is a so-called "third fastener" in which a vertically-oriented bolt engages a horizontally-oriented, "horseshoe" shaped rib extension.  What this type of fastener provides, that no other "third bite" does, is positive axial restraint of the breech.  Meaning, that it prevents the barrels and standing breech from moving "fore and aft" (in opposite directions, due to breech thrust) during firing.
Most break-action designs only restrain the barrels in the vertical plane and, while this keeps the barrels from pivoting open during firing, it also allows the standing breech to deflect axially, since this axial deflection is resisted only by the mass and strength of the material at the juncture of the standing breech and the frame flats.  This is the reason that double rifles usually exhibit "bolsters" of added material at this juncture.  Unfortunately, many of these bolsters are little more than ornamental by design.
Many third bites, such as Purdey's and Holland& Holland's hidden third bites, also allow this deflection to occur due to the fact that these "hidden bites" also act to restrain the barrels only in the vertical plane.  The so-called "doll's head" rib extensions are supposed to prevent this axial deflection but, with the exception of Westley Richard's bolted doll's head, all fail in this regard.  It must be noted here that Westley Richard's bolted doll's head was their primary (and only) fastener for quite some time and they later added the underbolt in order to make the gun have three bites, so WR's doll's head is not technically a "third bite".  The Greener-type crossbolt has the potential to prevent this axial movement but only if fitted properly, which most are not.  In fact, in most guns (other than Greeners) that employ this type of third bite, the bolt makes little, if any, contact with the rib extension.
The rising bite demands appreciable skill in its fitting during manufacture.  The underbolt and the vertical bolt must fully engage their bites when closed, and the linkage that connects them must be designed so that both bolts clear their respective bites at the same time, in order to allow the barrels to open, while also translating the underbolt's horizontal movement to vertical movement of the rising bolt.  The added time in design and manufacture obviously adds to the cost, and this is probably the primary reason that it's not seen more often.
All of the above applies to single-barrel and side-by-side guns, whose frames are inherently quite flexible.  Over/unders (especially a Boss-type) are a bit of a different story since their frames are much stiffer (more resistant to deflection), due to their frame height and the deep sides of the frame acting as shear webs.  The rising bite in the Boss guns is a very technically interesting design but, owing to the frame's inherent stiffness, it is little more than technical curiosa.
The over/under's inherent stiffness in the vertical plane, not only in the frame but also in the barrels, is one of the reasons that the O/U is technically superior to the SxS.
I hope this helps.  If you have any further questions, feel free to ask.
Dewey
Posted by Dewey at 10:11:00 AM No comments:

Python Hammer for a Super Redhawk

The customer wanted a Python-esque hammer spur for his Ruger Super Redhawk.  This was a bit more involved than simply welding a new piece to the existing hammer.  In order to capture the look of the Python hammer, a good portion of the upper half of the existing hammer would have had to be welded up in order to have enough material with which to work.  I did not want to do that much welding on the part for a couple of reasons, namely that the original hammer is a casting and I didn't want any casting porosity spoiling the looks of the finished part.  The second reason is that, due to the hammer's height and speed, it's carrying quite a bit of inertia, and the last thing I'd want is for the hammer to stop while the spur keeps going.  The obvious answer is to simply make a new hammer from scratch, in the configuration needed.

The photos below detail that process.

The original hammer and the blank that contains the new part.  I simply remove everything that isn't the new hammer. 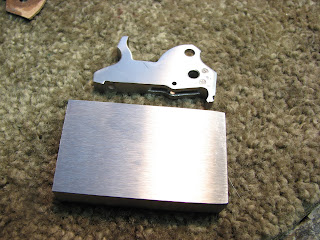 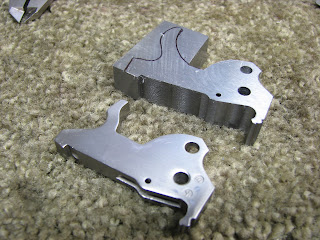 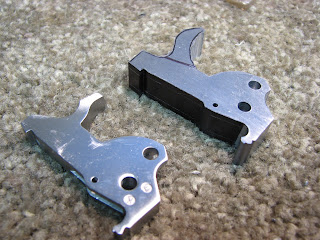 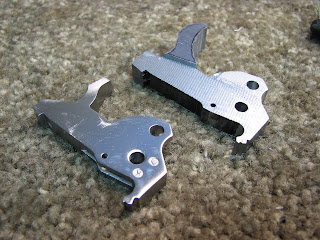 From this point, it's all hand work.  Reaming the pivot pin holes, shaping and checkering the spur, fitting the DA sear and timing the DA hand-off, and preliminary setting of the SA sear angle are all done at this stage.  Heat treatment and final polishing, followed by final fitting of the SA pull are next. 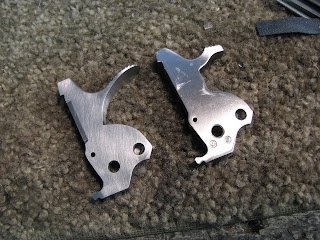 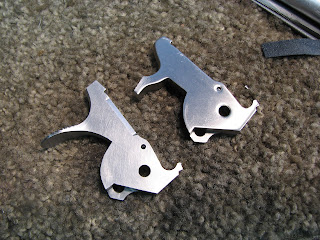 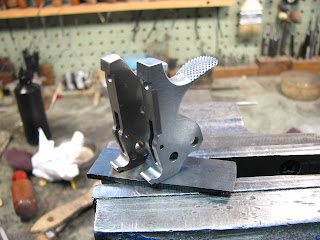 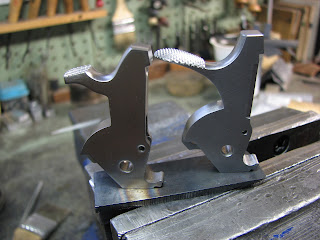 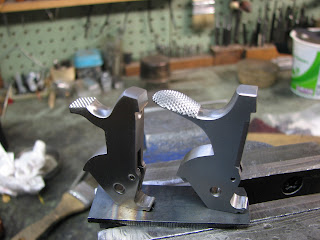 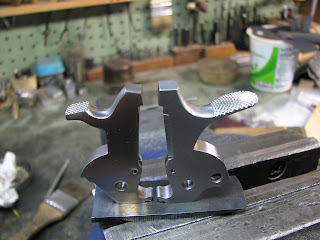 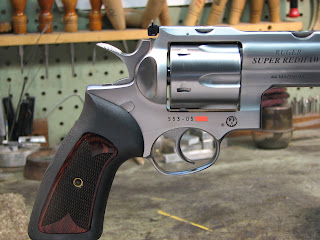 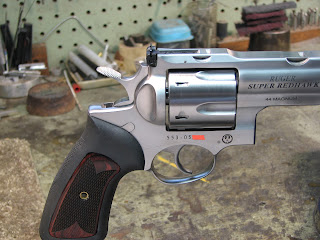 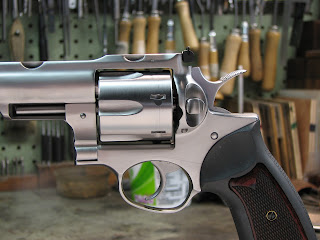 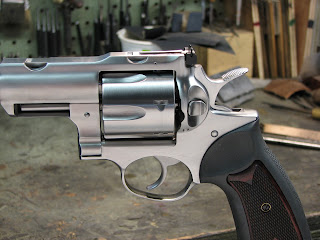 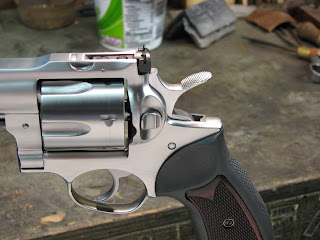 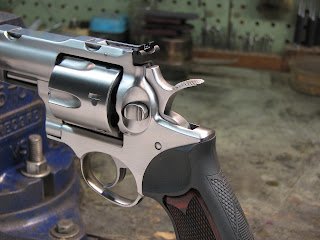