It's not gun related but it is an interesting piece of automotive and industrial history.  What it is, specifically, is the original patent model made to illustrate the function of the catalytic converter, invented in the early 1950s by one Eugene Houdry.  Mr. Houdry was apparently a pretty sharp fellow where chemistry was concerned and has some very interesting accomplishments to his credit, a few of which are outlined here:  https://www.sciencehistory.org/historical-profile/eugene-houdry 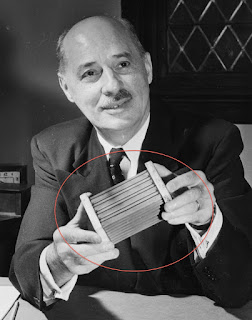 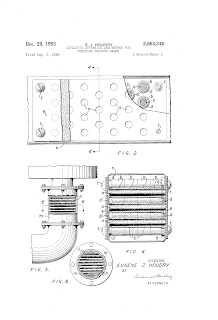 What the heck is it doing here, on a gunsmithing blog (you may wonder)?  I'll explain.  One of my clients is a serious "car guy" and his wife happens to be a granddaughter of Eugene Houdry and she had "inherited" the model when her parents passed away.  My client found out about it when he discovered it (and a bag of broken pieces) in a pile of stuff that was to be discarded.  Recognizing what it was (and its historical significance), he rescued it from the discard pile.  Knowing that I'm a fellow "gearhead" and former professional modelmaker, he thought that I'd be interested in restoring the model.  Of course I agreed to do the job.

The model was apparently originally made using some sort of plaster castings for the rod elements of the catalyst bed.  These are very brittle and easily broken by careless handling and, unsurprisingly, a number of them were broken into multiple pieces.  These rods have a teardrop cross section and are arranged in staggered rows between the endplates.  Unfortunately, many of the broken pieces that were saved had been rendered to dust from bouncing against each other in the bag in which they were stored, so simply reassembling the pieces was not an option.  What I did was to take some of the larger fragments, squared their ends and glued them together, making one piece that was slightly longer than it needed to be.  After leveling the glue joints and sanding the entire surface smooth, I had a plug from which to make a silicone mold.  Once the mold was made, I cast enough copies in urethane to replace all of the missing pieces.  The original was made by trapping the rods in pockets in the endplates.  Since I dared not attempt disassembling the entire model to install the replacement rods, I had to decide how the new parts would be installed.  I could have cut each one to length and simply epoxied them in place or, I could make good use of the urethane's flexibility when heated.  I chose the latter.  After cleaning out all of the debris from the pockets that located the now missing rods, I cut the replacement parts slightly over length, then heated them enough to "flex" them into place.  Prior to installing them, I'd primered and painted them because it would be impossible to access some areas after assembly.  Once in place, I straightened them and quick blast of compressed air cooled the part, leaving it trapped in place and straight again.  This process was repeated for all of the missing pieces.  Once that was done, the replacement parts were touched up with paint.  The final step was to "weather" the new parts to match the aged appearance of the original parts. 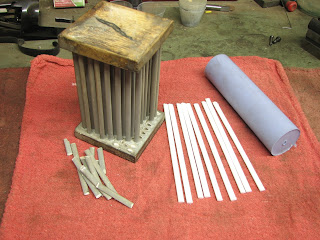 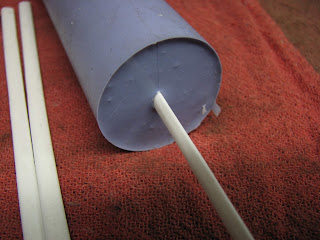 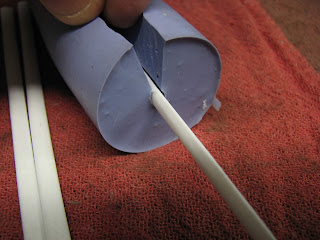 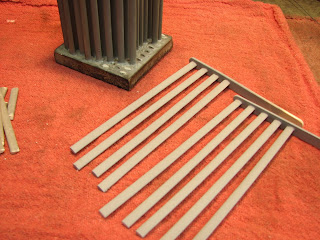 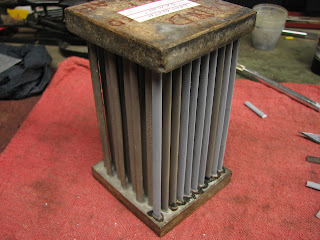 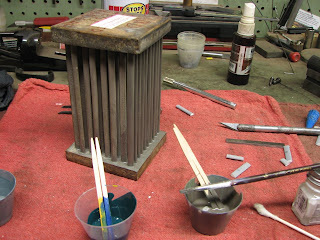 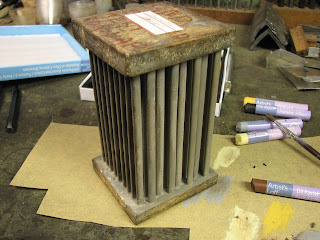