This BLE came in with a broken left-side ejector tumbler so a new part needed to be made.  While the Southgate ejector is very simple in operation, the tumblers are among the most complex of the internal parts to make and fit.  The process is detailed below.

The original part failed at a thin section that was where a sharp inside corner was left. 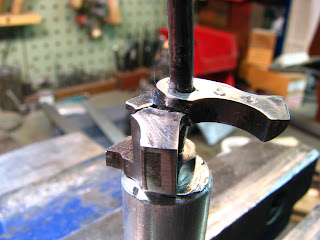 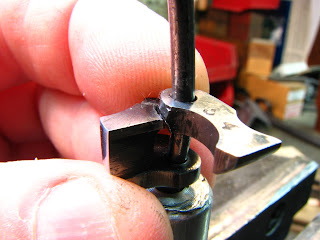 I selected an appropriately sized piece of  W-1 stock and went to work.  At this point the milling machine work was done and the part would be finished by hand with files. 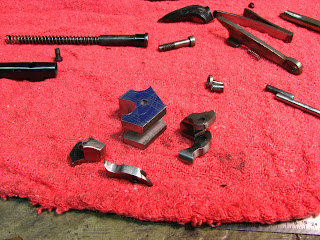 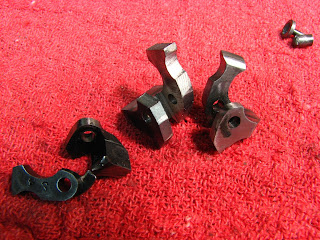 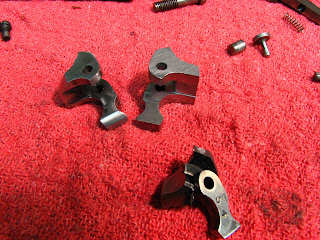 The finished part, notice the generous inside radius at the point where the original part failed. 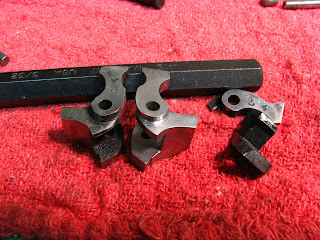 The inboard web was also made thicker than the original part to add some strength in this highly stressed area. 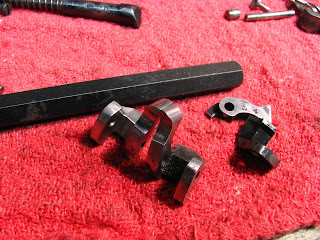 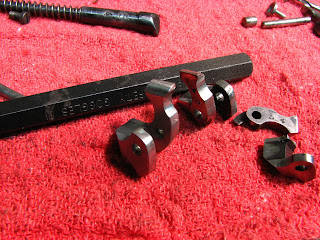 The tumbler was heat-treated and polished before installation then fitted so that its timing was perfectly matched to the right ejector.
Total time 7 hours.

A Leather Recoil Pad for a Holland

A leather covered recoil pad adds immeasurable aesthetic appeal to a fine gun, when it's done right.
When it's not done right, few things look so atrocious.  Here's how to do it right.  You will note that the heel and toe of the pad are NOT radiused so much that the pad ends up looking like a cantaloupe that's been cut in half.  A huge radius on the heel and toe certainly makes it easier to stretch the hide over the pad without wrinkles but it also ends up looking very, very bad.

The traditional pad to use as a base is the classic red Silver's but they're pretty heavy which must be taken into account in order to maintain the gun's balance.   This particular gun is a very light 16 ga and the owner wanted to maintain the gun's balance exactly.  With that in mind, I decided that a Pachmayr pad would be the best choice because of its light weight. 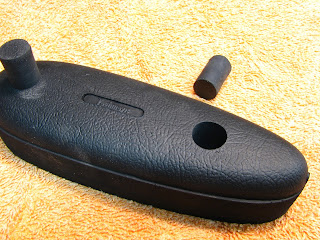 The next step is to remove the length of the pad from the buttstock.  The holes already present in the stock are how the balance was adjusted when the gun was built. 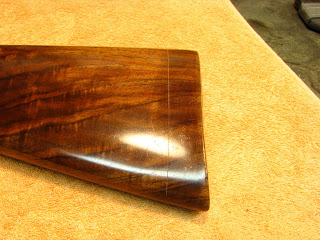 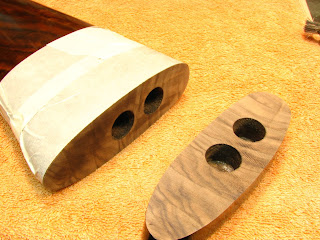 Next, the pad is ground to the contours of the stock.  This is done very carefully, with the pad in place, no half-assed "recoil pad jig" is used.  After that the pad is reduced by the thickness of the leather all around its periphery, by hand.  This is done so that the leather is flush with the wood when it's finished.  The face of the pad is also reshaped because the shape of the Pachmayr pad is completely wrong. 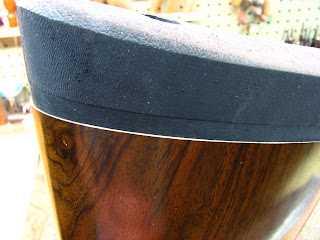 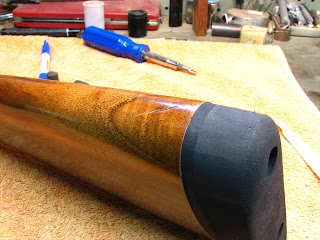 The gun also had a couple of pretty nasty dents in the stock near the heel.  These were also addressed during the pad installation. 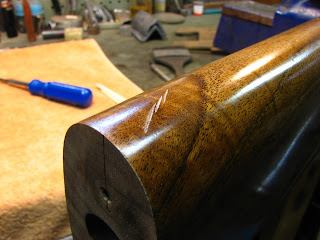 With the pad shaped, it's time to start the covering process.  Most any leather is appropriate as long as it's thin enough and undyed.  The classic leather is pig skin and that's what I use unless something else is specified by the client.  No wrinkles allowed. 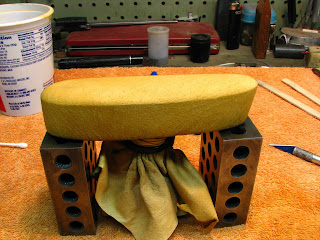 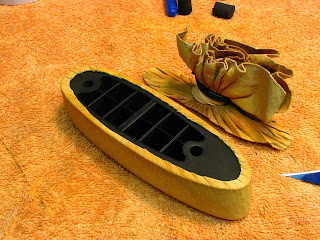 Gussets are cut into the cover so that it will lay flat on the pad when glued down.   The screw holes are treated the same way.   The entire cover is glued to the pad. 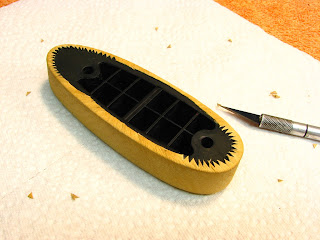 After the cover is glued down the leather is dyed.  Brown or reddish brown is traditional and is what I use unless the client asks for some other color, in which case I politely tell them that they can have brown (or reddish brown). 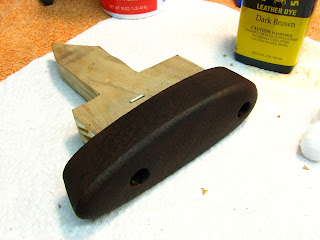 While the dye is drying on the pad, the plugs can be covered.  First step is to reduce the diameter by twice the leather thickness.  This is because the outside of the plug is covered, as is the inside of the hole into which it must fit. 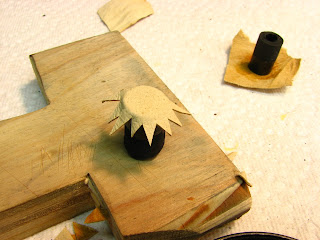 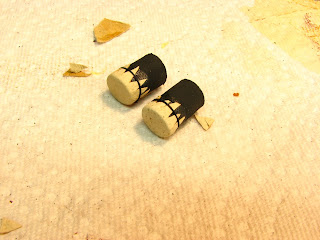 While the dye on the plugs is drying, the pad can be polished in preparation for the final operation before mounting, lining.  Lining is the burnishing of one or (usually) two border lines at the base of the pad.  It is done on a purpose made tool as seen in the photo.  When one line is done, the burnisher head is flipped over to do the second line. 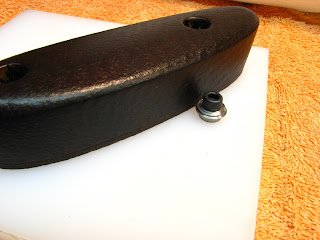 The pad is finished and the dents are repaired. 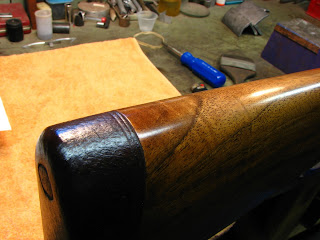 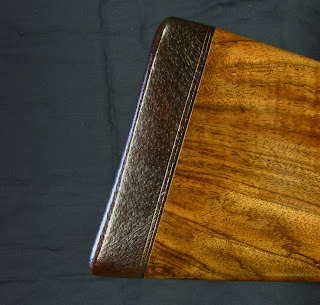