This one came in for the repair of a dent in the right barrel, to have the chokes adjusted and replacement of a missing ebony and ivory inlay in the stock.  Since looking at photos of the first two procedures would be pretty boring, I only documented the replacement of the inlay.

Here is a photo of the stock, as it came in. 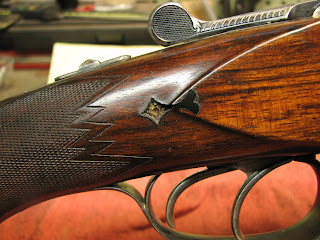 I cleaned the old glue from the pocket and then deepened it overall in order to give the glue joint a bit more purchase on the new inlay. 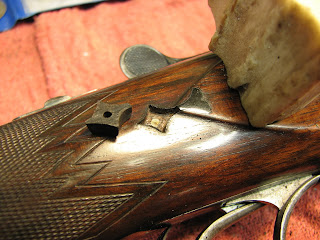 You're probably wondering about that chunk of beef bone, I'll explain.  That is what I use in place of ivory because I don't use actual ivory for any application.  The beef bone is a waste product and the ends of the femur are big enough to get just about anything short of pistol grips from.  It machines, polishes, smells, looks and is indistinguishable from actual ivory.  If you think that you can tell the difference, you're quite incorrect. 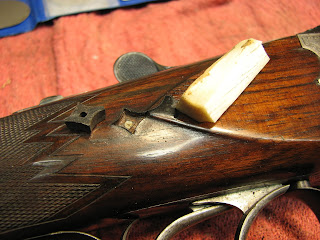 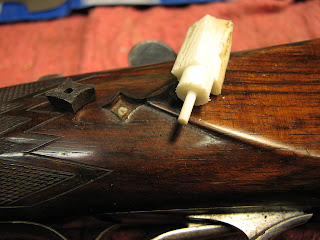 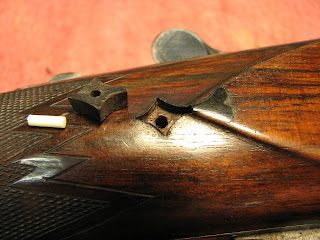 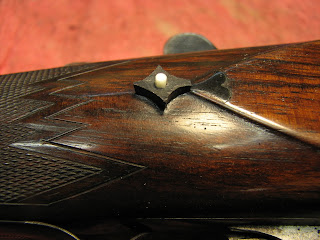 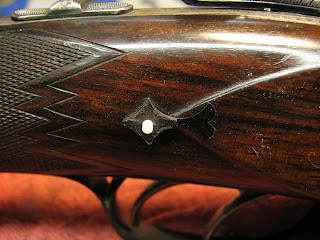 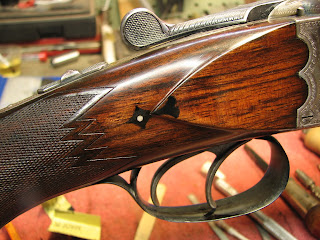 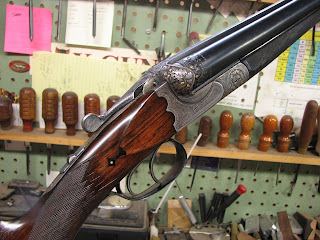 Here are some photos of a chunk of bone that I used to make the "ivory" portion of the inlay.  As I said, it works exactly like ivory in every way, including the smell and the ability to take a mirror polish.  There are quite a lot of beads in that piece alone. 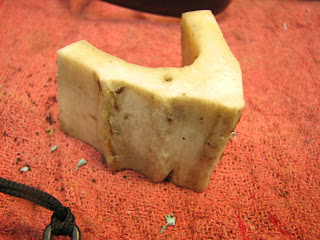 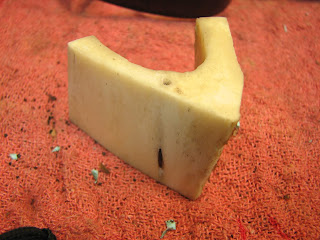 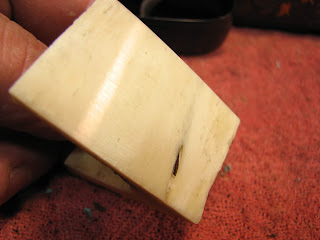 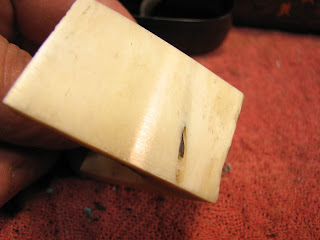 Words have definitions for a reason but like so many things in the gun world, the meanings of certain words have become, shall we say, "elastic".  Personally, I believe that a particular word's definition is written in stone, otherwise there is little point to having language at all.  Here are some of the gun world's more flexibly defined words.

Restoration:
(actual meaning) - to return an item to its "as new" condition and configuration

"As new" is not better than new, nor is it what typically passes for a restoration by the vast majority of the practitioners in this business.  A gun can only be correctly restored if the workman has detailed knowledge of how each part was prepped for finishing, the processes used at the factory for applying the finishes, the material the parts were made from and how they were heat-treated (if at all).  No factory-made gun ever left the factory as a perfect specimen of gunmaking (not even close, typically).  All factories tolerated less than perfect work in many aspects of the finished product.  A correct restoration will show these same "mistakes", where appropriate.  I did this type of work for a long time and am quite happy to say that I do it no longer.

Upgrade:
For this one, the gun world meaning is really the only one that matters.

(gun world meaning) - to take a low or field grade gun and embellish/finish it in a way that, as closely as possible, mimics a factory-offered higher grade version of the same gun

That pretty much covers what an upgrade is as far as guns are concerned.  Some however, might also refer to these as "custom" guns, which they most certainly are not, in any manner.  I've never seen the point to expending the time and energy necessary to create an upgrade, mainly because I've never been particularly impressed with anything "high grade" offered by a factory, which is why I never have, and never will, create an "upgrade" gun.  Slavishly copying something that already exists, especially something that was factory-produced, seems more than a bit unimaginative to me.

Custom:
(actual meaning) - made, or done, to order for a particular customer, unique*

(gun world meaning) - any deviation from original, no matter how trivial

This is one that gets misused possibly even more than restoration.  An AR-15, assembled with store-bought parts and accessories and spray-painted in a stars-and-stripes motif (I won't even get into flag etiquette)? Custom!   A shotgun with crappy aftermarket engraving?  Custom!   Any "factory custom" that can be ordered out of the catalog?  Custom!   A Winchester Model 70 with an aftermarket stock?  Custom!   A "windowed" and stippled Glock? Custom!
None of the above examples actually qualify as a custom gun.  They might qualify as "personalized" or "custom-ized" but nothing more.  If Joe Sixpack can duplicate it with a Discover card and a Dremel, it probably doesn't qualify.
A true custom gun (or anything else) is by definition unique*.

*Unique: being the only one of its kind, unlike anything else

(gun world meaning) - just about any condition, depending upon who is selling it

Actual mint-condition guns (old ones at least) aren't really that common.  What is common is for people to refer to guns that are anywhere from 85-95 percent condition as "mint".  These people are often dealers trying to justify an inflated asking price, or collectors trying to justify their paying an inflated asking price.  Also, no matter the condition, ANY discernible repair automatically removes a gun from the mint category.

Provenance:
(actual meaning) - a record of ownership of a work of art or an antique, used as a guide to authenticity or quality

(gun world meaning) - a nebulous quality that causes an otherwise unremarkable gun to magically be worth many times its actual value, usually by virtue of once having been owned by a "celebrity"

The idea that any product's value increases due to once being owned by a celebrity has always puzzled me.  Mere ownership by a celebrity creates no material change in the product and, in a rational world, would have no affect upon the item's value.  For example, a Parker of whatever grade once owned by Clark Gable is still just a Parker of whatever grade.  A beat-up Fox HE once owned by a racist outdoor writer unknown to most people, is still a beat-up Fox HE.  These people had no hand in the creation of these items, they merely bought them, or the company gave them as "gifts" (a.k.a. advertising).  Owning Clark Gable's Parker isn't going to transform you into Clark Gable, nor is it likely to make you a better shot.

You may have noticed that the gun world's meaning matches the actual meaning this time, which, for better or worse, is pretty much true.  An example of the positive influence of tradition can be found in the overall configuration of the English side-by-side gun.  Unfortunately, in the gunsmithing realm, "traditional  methods" still carry on in instances where they should clearly be relegated to the trash heap of history.  One example is the "witchcraft" of springmaking, and many of the traditional methods of that particular bit of gunsmithing can't be described as anything other than witchcraft.  This should not be so because metallurgy and heat treatment of steel (and all other metals) are actual sciences, long understood and reality based.  One would never know this to hear the multitude of methods for heat treating a spring (I will not even get into the things one hears when discussing the material selection for a spring).  One will hear tales of all manner of "special" ingredients like sperm oil, tempering oil, lime (for covering?), blood and such.  There will also be cautions about such ignorant nonsense as "keeping the spring dark" (whatever the f*** that means) and the ever popular (and idiotic) "you either have a spring or you don't".  What you will almost never hear is a rational, reality based discussion about the effects of various temperatures upon the finished part, soak times, the various media used for accurate and controllable tempering, etc.  Where the fabrication or manufacture of any part is concerned, luck and hope should never be factors in the outcome. Everyone that subscribes to any of these "traditional" methods have two things in common: they never know if they will actually have a functional spring, or if it is functional, how many cycles it will survive.  They also demonstrate supreme ignorance, especially when one considers that the actual information is so readily available that would completely eliminate the "luck factor" from this particular operation.
Case hardening is another process that seems to be shrouded in an impenetrable fog of bullshit-scented mystery (at least in the gunsmithing world).  Again, one hears of "mystical" ingredients, even including urine and human bone.  What is not heard (or explained) is why such ingredients might be needed.  What do they do, chemically?  Don't bother to ask questions, it's traditional, that's why.  It's unfortunate that materials science and actual engineering have largely passed the gunsmithing industry by.  It's also baffling because the materials from which guns have always been made, as well as the processes used, are so well understood in every other industry in which those same materials and processes are employed.  I suspect that many gunsmiths hold on to these "mysterious" methods in order to give the appearance of being possessed of more knowledge than they actually have.  Far too much in the gunsmithing trade is done in the way "it's always been done" rather than in the way it should be done, that is in a thoughtful, logical manner.  Tradition should never trump logic when dealing with mechanical devices (or most other things).

Heretic:
(actual meaning) - a person holding an opinion at odds with what is generally accepted

This one should be obvious by now.