Most of the American shotgun makers of the "classic" era made single-barrel trap guns, with Hunter Arms (L.C. Smith), Parker, Baker and Fox offering various grades of their respective designs.  Ithaca however made a number of SBT guns of different design.  The first two were designed by Emil Flues and both were every bit as good as the double that Mr. Flues also designed for Ithaca (I wish there were a font for sarcasm).  The final Ithaca SBT was designed by Frank Knickerbocker and that is the gun that surpassed them all in design, strength and aesthetics.  Indeed, the gun compares well with most modern-day trap singles and many are still in regular use.  It is, objectively, the best of the classic era trap singles.  Unfortunately, the Knick shared one design element with its predecessors, that being a triggerguard that seems to have been designed to win an ugly contest.  The guards on Ithaca trap singles all lacked a "return" on the bow portion of the guard, where the strap portion splits off.  The vast majority of them also possessed shapes that were anything but oval.  The Knick is a good-looking design and it deserves better than the afterthought that passes for a triggerguard that comes from the factory.  This particular Knick is also a Sousa-grade gun (named for John Phillips Sousa), so the new triggerguard would be engraved and inlaid to match the factory pattern.  Apparently, being a very high grade gun didn't stop one (or more) incompetent buffoons (gunsmiths) from wreaking havoc upon it during its lifetime.  The breechscrew was unsurprisingly mangled, as was the trigger's anti-rattle spring.  The sear spring was some sort of "universal" replacement, the sear nose had been welded up (presumably to correct an earlier "trigger job") and the weld had predictably failed (I've written elsewhere about the folly of welding certain parts) and the forend's draw screw was cross-threaded.  Alright, let's get to it. 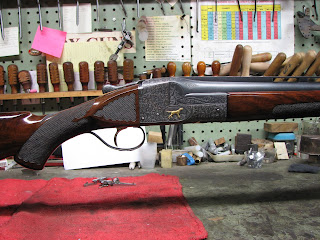 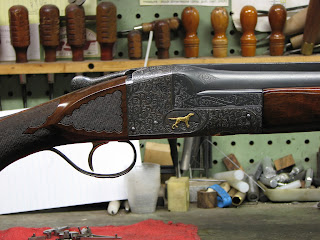 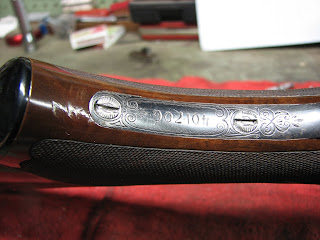 The new guard was mad to fit the original inletting, so that the gun could be returned to the factory original configuration.  Because of the gold inlays, the frame could not be held in a vise, even with padded jaws (24K gold is REALLY soft), so I made a plate and stand-offs that mounted in the triggerplate screw holes and held the plate in the vise.  The guard was fabricated in the usual fashion: bow, stud and strap, all welded after fitting.  The screws are made in the usual manner. 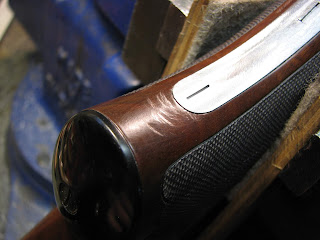 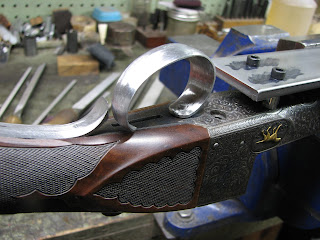 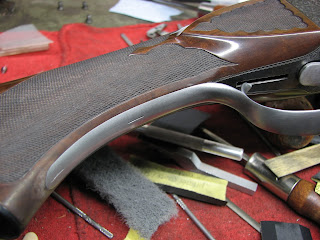 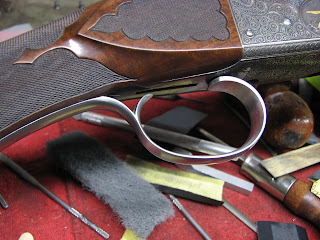 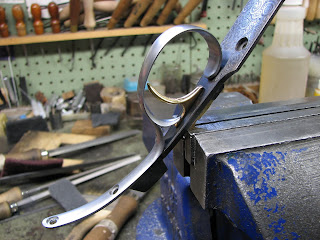 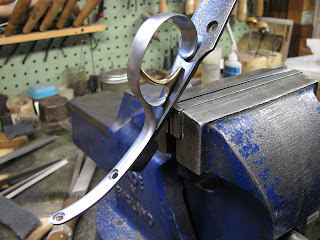 The triggerplate is relieved where the strap meets it so that there isn't a "bump" in the grip.  Because of the shape of the original guard, this relief is very far rearward and moving the relief forward would be readily apparent if the original guard were reinstalled.  To accommodate this, I put a mating relief in the new guard so that it actually sits atop the triggerplate, and shaped the external contours to make it all blend together. 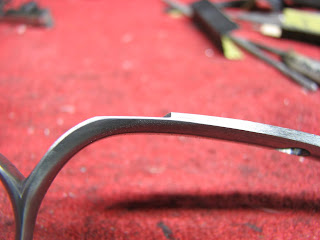 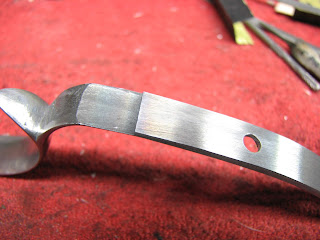 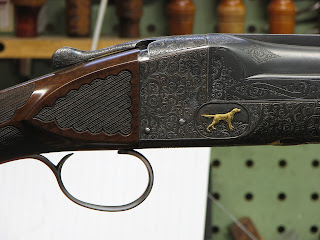 The breechscrew is next.  Beside the slot being mangled, Bubba also removed material from the underside of the head, presumably to align the slot. 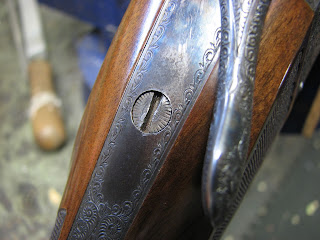 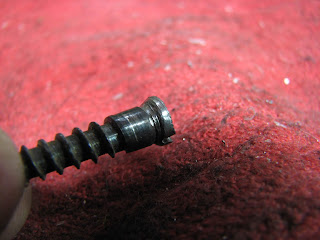 The new screw: I know it's not aligned, that's because it's not tightened.  I engraved the breech, triggerguard and grip cap screws here for two reasons, I can do Ithaca screw patterns asleep and fewer parts to mail to the engraver (and possibly get lost). 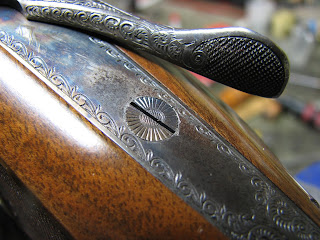 Onward and inward.  I have no explanation for the anti-rattle spring, sometimes it's better to not know.  Before I made the new spring, I machined a pocket to locate the bottom end. 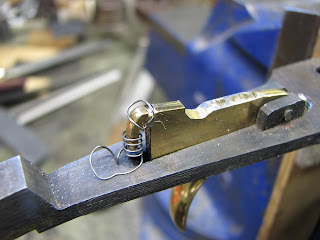 Next was the sear.  The previously welded part was scrap so I had to make a replacement from O1. 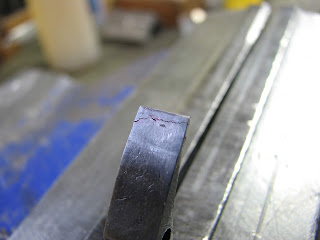 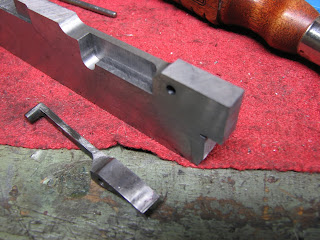 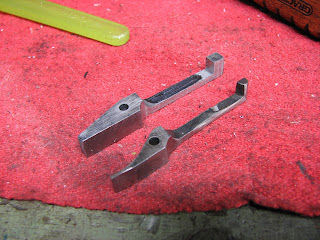 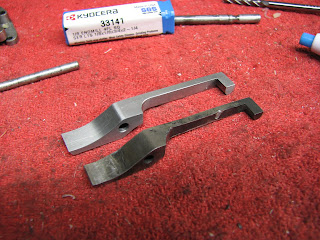 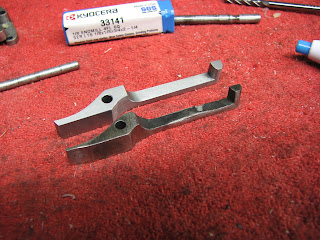 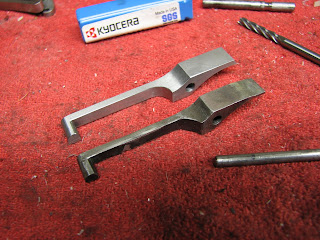 With the new sear heat treated and fitted, all that was left was to make a proper sear spring, correct the cross-threaded forend draw screw, blue the guard, lube and reassemble.

The finished job, the inlay and engraving of the guard are by Lee Griffiths and duplicate the factory work quite well.  I repaired the dented wood around the guard and refinished and blended the repaired area. 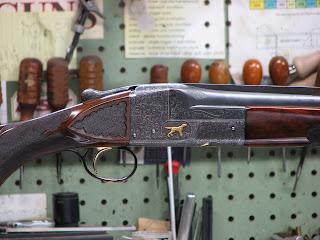 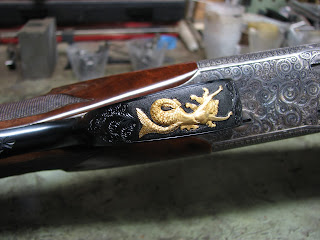 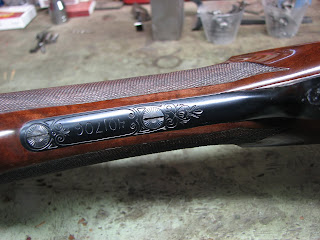 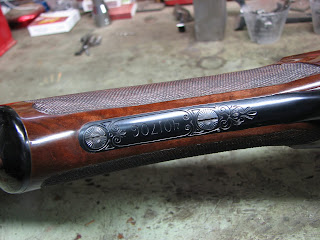