My friend Pete sent me this.  It made my day, maybe it'll do the same for you.

Email ThisBlogThis!Share to TwitterShare to FacebookShare to Pinterest
Labels: Elephants and Ivory

There is always a story and this Fox XE 20 is no different, so let's start at the beginning.

The gun letters as a Philly-made XE, 20 gauge with 26 inch barrels and full choke in both tubes, and that's just what it is, except the barrels it currently wears didn't come from Philadelphia, but from a certain shotgun manufacturing company.  I can only surmise that the original barrels were lost or damaged and the above referenced shotgun manufacturing company made a new set for the gun.

They are in fact 26 inches in length and both barrels are full choked, but it appeared that they did not start as 26 inch barrels, or at least the top rib started life as a longer part.  The lightening slot on the underside of the top rib was plainly visible (as it always is when barrels are cut), the left and right tubes weren't even in the same zip code, the triangular filler pieces were absent and the whole muzzle was simply chopped off square.  The barrel "addresses" were hand-engraved (not well) and the floral "wedges" at the breech end were clearly done with modern, powered equipment as all of the cuts are far too smooth and bright. Also missing were most of the shading lines in these wedges and the "lining" on the bright polished surfaces.  This is entirely incorrect for an XE and the correction of these issues is the subject at hand.

The first step was to disassemble the ribs and forend lug and "adjust" (via file) the spacer blocks between the barrels to correct the muzzle convergence.  Next was to adjust the top and bottom ribs (again, by smoking and filing) to properly fit the newly acquainted barrels, followed by "shutting off" the slot in the top rib and making the missing filler pieces. Then the whole works was tinned and reassembled.

After removing all of the burnt rosin and stray solder, the barrels were polished and I went about making the muzzles look like those of an XE.

Next was to chase the engraving, using a hammer and appropriate gravers, to more closely duplicate the "ratchet-ty" look of the engraving cuts that would have been done at the factory.  I then cut the shading lines in the background, which is every bit as tedious as you'd think.

Removal of the hand engraved barrel addresses, and preparation for recutting them in the correct style, was the next item on the to-do list.  The addresses were originally (Philly and Utica, that is) roll stamped and the quality of the finished marking varied widely.  I cut them on my pantograph using patterns that were made to duplicate the original font.  After some minor touch-up to the shading lines that I'd previously cut, they were finally ready for rust bluing.

Following bluing, I detail polished all of the surfaces that would be appropriate for an XE.  These are: the breechfaces, rib extension, raised portion of the barrel flats, the lump and the muzzle bevels and face.  Reassembly and installation of two NOS Lyman beads completed the job.  The photos are below.

The muzzles, as received 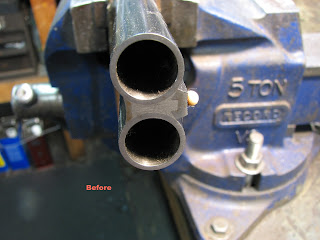 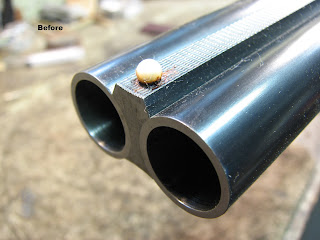 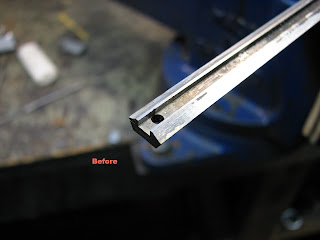 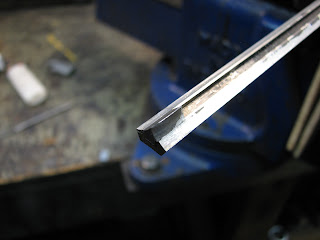 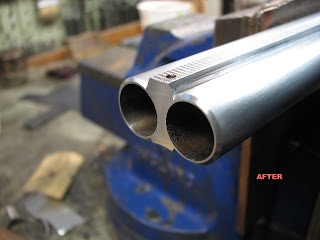 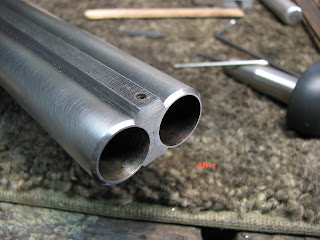 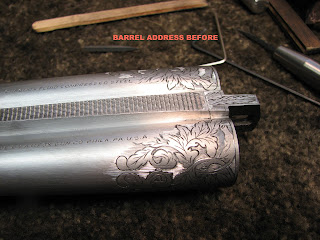 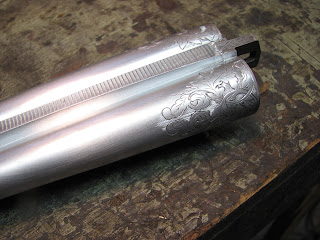 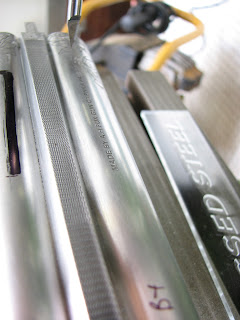 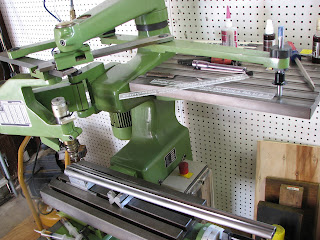 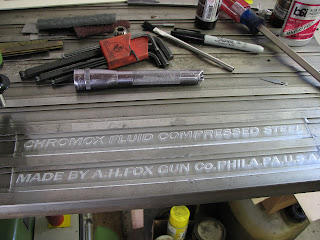 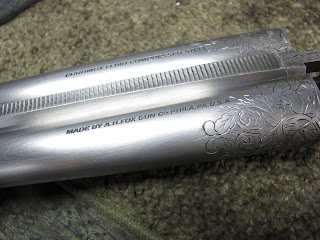 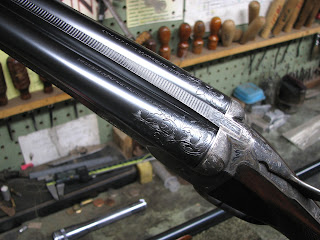 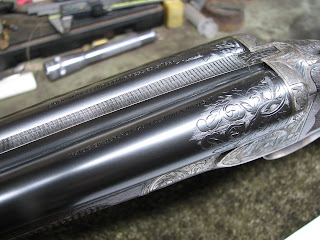 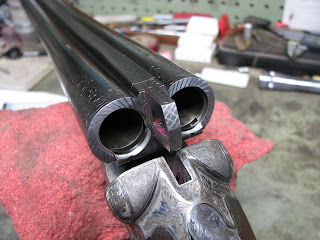 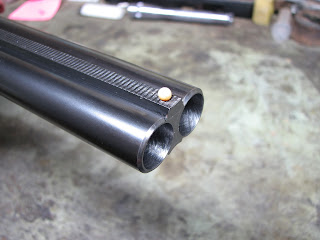