"Ringing" the barrels of a multi-barreled gun to check the integrity of the rib joints seems like it should be an easily done and easily understood procedure.  Apparently, it's not.  It seems that some can't tell a "ring" from a "clank".  I don't think that this is because of any hearing deficiency but rather, they just don't know exactly what it is that they should be listening for.  The following videos will hopefully shed some light (or add some volume) on the subject.  Another thing to keep in mind is that the "ring test" is only valid when the barrels are bare, no extractors, ejectors, forend latch parts, cocking slides, etc.  BARE barrels.  This applies especially in the case of American guns because of the level of imprecision with which these parts are fitted.  If these parts are left in place, they will affect the way the tubes vibrate and therefore, the way that they sound when struck.  The barrels must also be hanging freely, ideally from a wire by the hook.  Definitely not with the lump pinched between the thumb and forefinger, or with the hand wrapped around the chambers.  Finally, it does not matter whether the barrels are for a rifle or a gun, they should sound the same.

You'll want to make sure that the volume is turned up.

Here is an example of what you don't want to hear.

This is the sound you do want to hear.   Not "sort of" or "kind of" or even "pretty close", this is the only sound that will emanate from barrels with sound (pun intended) rib joints.

This was a Westley Richards 1897 falling block rifle in .450 caliber.  It had at one time been rebarreled and whoever made the sling eye didn't get the shape of the sling eye quite right.  It looked more like that of a Rigby rifle and had a deep machine mark in the base as well.  I reshaped the existing part to more accurately reflect the shape that would have been found on a Westley Richards.

The sling eye as received 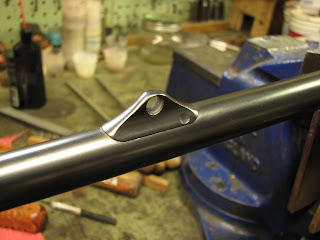 After a bit of file work 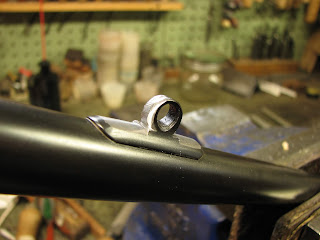 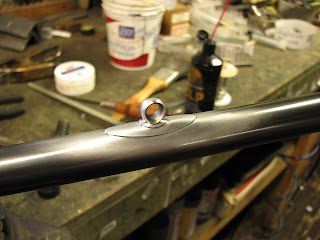 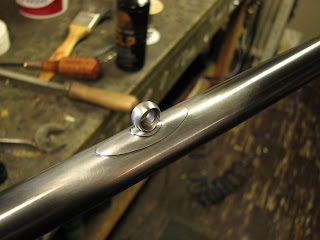 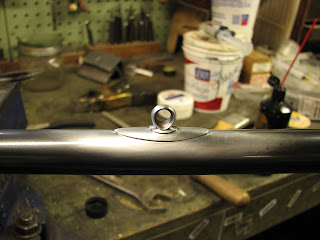 In the interest of full disclosure, the following will be a rant.  Parts of it may be amusing, but still a rant, none the less.  It might even serve the purpose of clarifying a few things, so here goes.

So, What Do You Actually Do?
A.k.a., What's your "real job"?
This one is really a head scratcher.  Perhaps it has its roots in the number of hack dabblers that have taken their crimes against craftsmanship to the next level by getting an FFL, hanging out a shingle and "going pro" when they should concentrate on their day jobs.
My business is my livelihood and my sole source of income.  I do not have a stock portfolio, I do not collect a pension from a prior real job and my wife does not have a "sweet gig" that allows me to "play gunsmith".
Please note:  The above is in no way an indictment of the serious, and seriously talented, hobbyists out there.  Many of those guys could teach the "pros" a thing or two.

Who Does Your _________?
For the billionth time, I DO NOT FARM OUT WORK.  If I offer a service, I'm the one who does it, period.  It's insulting and it clearly means that you assume that I could not have done whatever it is you're asking about.  Maybe I should answer this question with one of my own, like: "Who f**ks your wife?"

But He's a Master Gunsmith.
No, the person who bodged up your gun is not a "master gunsmith".  There are NO "master" gunsmiths in America precisely because there is no guild or apprenticeship system in America to create apprentices, who then go on to become journeymen, and then finally, masters.  Anyone who presents himself as a "master gunsmith" should be viewed with as much suspicion as one can muster because he's the one who gave himself that title.  There is at least one gunsmithing school that actually awards a "master" diploma, for completing a 16-month course.  One and a half whole years of "school", truly, they must be masters.  I could go on and on about gunsmithing schools in this country, but It's too depressing.

But He's an English-Trained Gunsmith.
A British accent is no guarantee of competence, nor of honesty.  Why gun people go all gooey over a Brit accent is a bit of a mystery to me.

Who Would You Recommend To _____________?
I get this one a lot.  Why someone would call or e-mail a gunsmith and ask them to recommend a gunsmith is a bit baffling to me.  It seems a bit like asking your dentist if he knows a good dentist.
It's rude, don't do it.

Can You Tell Me How To ______________?
When people e-mail me or call me on the phone asking how to do something (usually very specific), it can only be seen as a minor miracle that my f*****g head doesn't explode.  Do these people call a lawyer asking for free advice?  How about calling the car dealership and asking how to fix your car?  Call a plumber and ask him to literally talk you through replacing the water heater?  I didn't think so, but for some reason there are some people who own guns that think that's okay to do.  They go on forums and spout off about socialism and other political nonsense, but when they need information about working on a gun, they suddenly turn into a pretty good imitation of "socialists", meaning they want free stuff, in this case, information.  The internet seems to have made everyone believe that "mere information" should be free, for all (community and all that).  Well then, go to the internet gun forums if you want free information, it will usually be worth exactly what you pay for it.

Can You Give Me a Quote?
No.  I can give you a rough idea of the cost but, until I get inside the gun, I won't know the extent of a problem, nor can I know what previous "gunsmithing" needs to be corrected.  Most old guns have been worked on at some point in their existence and that work varies widely in quality.

That Seems Awfully Expensive.
What is your frame of reference to have any opinion, at all, as to what something as esoteric as this kind of work should cost?  You're paying for skilled labor that, literally, a handful of people in this country are capable of performing.  This is not flat-rate wrench-slinging at the Chevy dealership.  I won't even get into how many hours that I don't bill for just because I want anything that I do to be as good as I can do it.
I'm also pretty sure that most good plumbers charge more per hour than I do.

So and So said he could do it for this much.
Then take it to them.  I'm not a hack and, as they say, you get what you pay for.

But I've Already Got _________ Dollars In It.
To be blunt, I don't care.  What you paid for the gun has zero effect upon the value of my time, which is non-negotiable.

What Can You Do For ______ Dollars?
Nothing.  I do not, and never will, work down to a price.  I would either have to do the entire job for your price, at lower quality, OR, I stop work once I've hit your dollar limit.  I choose neither.

The patient is an AyA Number 2 SLE with a failed primary sear spring in the right lock.  Luckily, the interceptor performed as designed and kept the tumbler from falling and causing an unintended discharge.  The Number 2 is a straight Holland pattern sidelock, nothing unusual or novel about the design.  So how does something so ordinary warrant mention in my gallery of the weird, odd and unusual?  Well, first off, there are no unimportant parts in a shotgun.  Secondly, because the failed part is a perfect example of how not to make a spring.  I don't know if it was because an apprentice was entrusted to make the part, if it was made just before the weekend or if a bit too much txakoli during lunch played a part but, no matter, let's get on with it.

The original spring.  Now, we all know that the limb(s) of leaf and V-form springs should taper, gracefully and continuously, being thicker at the root and thinner at the extremities so that the entire limb flexes from tip to root.  The maker of this particular part didn't get the memo, however.  The lower limb collapsed right where you'd expect it to do so. 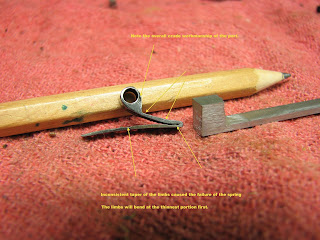 This spring has an integral tab on the back side of the top limb that engages a slot in the lockplate to keep the spring from simply rotating around the mounting screw.  A piece of O1 flat stock with sufficient thickness was selected and the blank for the new part was cut from it.  O1 generally isn't the first choice for forging but it can be done in thin sections (such as a spring), as long as it's done at the proper temperature.  With the crotch of the spring formed, the back side was machined and filed to create the aforementioned locating tab.  Then the mounting screw hole was drilled and the rest of the spring was filed up in the usual manner. 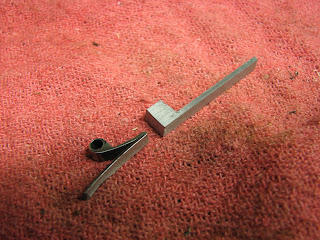 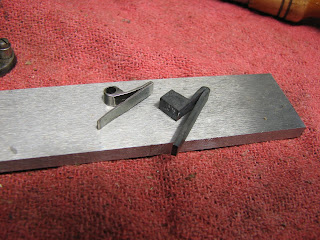 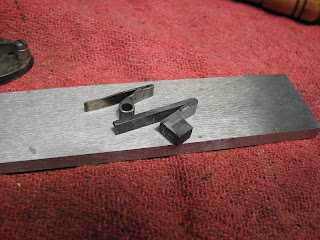 I also filed up the "ring" around the mounting screw hole a bit more artfully than the original.  After fitting it was heat treated, polished (by hand) and the lock reassembled. 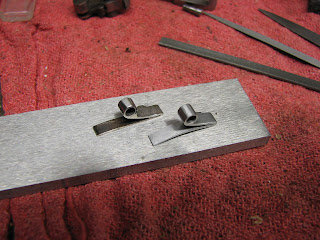 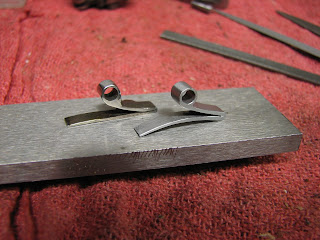 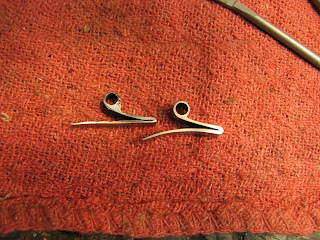 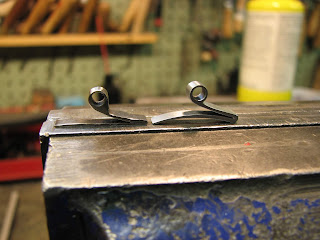 The gun also needed a new right side striker because the original was bent, causing it to stick and not retract.  I didn't document that part of the job because we all know what a Holland pattern striker looks like.
Posted by Dewey at 7:35:00 PM No comments: