If you ever find yourself at a gathering of collectors of American doubles and need a conversation starter, the subject of triggerguards and nitre bluing should make for a lively exchange.  There are those who correctly state that the nitre method was the finish used and, invariably, there is a self-styled guru in the opposite camp. There are only two factory-original finishes found on the triggerguards and other peripheral parts of a classic American doublegun: nitre blue or casehardening.
The assertion that the only color that the nitre methods yields is the bright "peacock" or "fire" blue is patently incorrect, and serves only to illustrate ignorance on the subject.   The nitre method can yield colors anywhere from a light straw color to black.  I routinely blacken parts using the method, and I do mean black.  This is without adding any chemicals to the nitre bath.  The idea that the finish is too "delicate" or "short lived" to be used on a triggerguard is nonsense as well.
Prior to 1937, the hot caustic black oxide (commonly known as "hot bluing") method did not exist.  The Mauser firm was the first to use it and by 1938-9 it had made its way to America.
The methods that existed for blackening steel prior to the above-mentioned "hot blue" were rust bluing, nitre bluing, charcoal bluing, heat bluing, Carbona bluing (also known as machine bluing, among various others) and paint (that's not a joke, Winchester finished their stainless steel barrels with a product called "black Japan" which, effectively, was paint).

Where "classic-era" American doubles are concerned, no American maker EVER rust blued any parts EXCEPT barrels, neither did the British.  The British used the labor-intensive charcoal method to blacken the furniture on their best-quality guns and the nitre method on their lesser, production guns.  Only the Germanic makers ever rust blued everything (they seemingly had quite an affinity for the process).  If I had a buck for every so-called "restoration" (there's that word again) of an American double that I've seen with rust-blued triggerguards and forend irons, I'd be able to retire to the Bahamas.
I repeat, all American doublegun makers used rust blue for barrels ONLY.  Any peripheral parts such as triggerguards, toplevers and forend irons that were not color case hardened were in fact, nitre blued.  I know this to be true because the finish is called out on the parts drawings of some American manufacturers.  There is no reason to believe that all American makers would not use the exact same finishing methods, especially when that method is perfectly suited to mass-production by semi-skilled labor.  I have seen actual original examples of the finish on these parts and I can duplicate them perfectly, as can quite a few others.

Savage was an early adopter of the hot caustic method which greatly sped up the finish process.
The only Fox guns that did not have nitre blued furniture are the very latest production, Savage-built guns. In fact, the very last Utica-made guns may be encountered with hot-caustic blued barrels because Savage started brazing the entire barrel assembly, ribs, forend lug and all, specifically so that the time-consuming rust-blue process could be eliminated entirely.  This practice apparently continued on with the production of the 311 and Fox Model B (which itself was a tarted-up 311).
Speaking of Fox guns, there are times that I wish that Michael Macintosh had never written that book.  As a biography, I can find no fault because I know nothing of Ansley Fox's life, but the book does contain technical inaccuracies regarding the gun itself.
Things like the Sterlingworth pin guns being made from surplus PAC frames (which is not possible) and the existence of Chromox frames.  All Fox frames were made of SAE 1020, this is proven by the material callouts on the actual drawings of the frame forgings.  This includes all Philadelphia-era drawings and the Utica-era drawings.
The drawings, #D264 (dated 01/28/1910), #D302 (dated 07/25/1911), #F1 (dated 05/24/1938 Savage) and #F201 (dated 06/31/1938 Savage) all call out the same material specification and that specification is SAE 1020.  How do I know this?  I have photocopies of the drawings.
The exception to the above are the New Britain Fox guns.  Those frames are made from 8620, which is a Chrome/Nickel/Manganese alloy with the same carbon content as 1020.  It has a much higher yield and ultimate strength than 1020 and is meant to be carburized (case hardened) like most other low-carbon steels.  The assumption that modern break-action guns use "4140" in their frames is also incorrect and seems to be rooted in the notion that 4140 is some sort of magical "gun steel" that is universally used in firearms production.  I blame this on gun-rag writers that (for the most part) know less about guns than their readers and toss this number into an article in order to sound credible.  The use of 4140 is nowhere near as widespread in the gun industry as many people believe.
Macintosh's assertion that a "Chromox" frame can be identified by how "shiny" it gets when worn is hogwash of the highest order.  The late frames' wear to a brighter finish is entirely due to the cyanide carburizing process that replaced the bone-charcoal carburizing process (coincidentally at the same time that the Chromox frames were supposedly introduced).  The cyanide process yielded a much harder surface than the previous method and a harder surface will naturally be brighter as it's worn from handling.
"Chromox" was a name that Fox's catalog copywriters came up with for a particular barrel steel.   The fact that a catalog copy writer stated that the frames were also made from the same material means nothing.  It's called advertising.

He also stated that the early Sterlingworth "pin" frames were made from leftover P.A.C. frames, which is physically impossible.  There is, in fact, evidence that the P.A.C. guns were not even made in Philly, but that's a story for another post.  Suffice it for now to say that the P.A.C. frames (and forend irons) may well have come from the same forgings as those of another well-known maker.

A comparison of Fox "pin" Sterlingworth and P.A.C. frames: clearly neither was, nor could have been, made from the other. 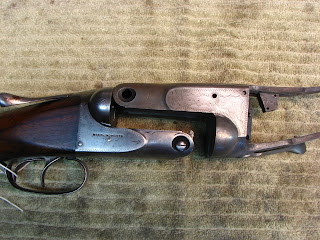 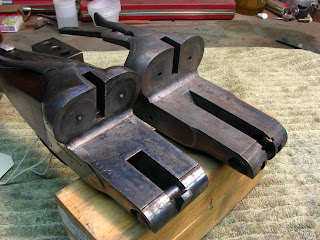 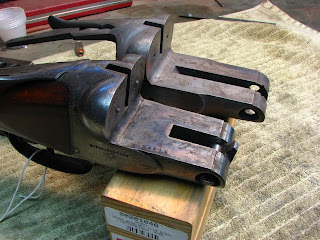 An example of nitre blued parts that are neither "peacock" nor "fire" blue in color.  The triggerguard, trigger, barrel selector and the toplever spindle screw (just ahead of the guard) are all nitre blued.
How do I know?  Because I'm the one that finished the parts (and the rest of the gun). 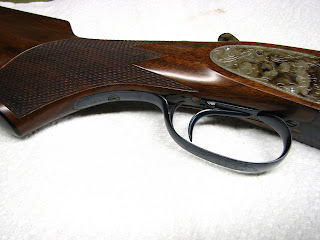 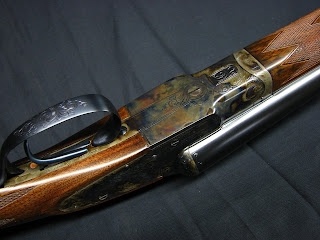 A Solid Rib for a Winchester Model 12

While not the typical job that comes through the shop, it was quite an enjoyable diversion from the usual doublegun work.  This started as a plain barrel Model 12 in 20 gauge and like seemingly every Model 12 on Earth, it's been reblued at least once.   The owner (who is a good friend and colleague) is going to restock it and refinish the entire gun for his daughter and he wanted a solid rib installed.  Not really for any reason other than a Model 12 always looks better with a rib.  It enhances the "lines" of the gun and makes it look finished, while the bit of extra weight forward certainly doesn't hurt the gun's handling.  NOS Model 12 ribs are pretty hard to come by and I didn't have a solid rib donor barrel to take it from, so it was made from scratch.  The material for this project is 12L15, which is a resulphurized and rephosphorized steel with lead (hence the L in the designation) added to further enhance its already exemplary machining characteristics.  With a yield strength of around 35KPSI, it's a perfectly suitable choice for a non-structural part such as a rib.  Making it from scratch also allowed me to make it of a width that looked good when mounted on that small-diameter barrel.

Unlike the factory rib, I hollowed the inside of this one to within a half-inch of the muzzle.  This saves a bit of weight but more importantly, it makes it a bit easier to get a skin-tight fit to the barrel when blacking it down (fitting to the barrel contour). 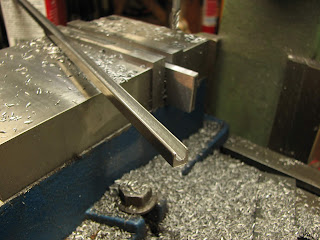 In this photo, the barrel appears to actually be "swamped".  It's really a bit of an illusion caused by a combination of the barrel taper, and the vertically tapered rib. 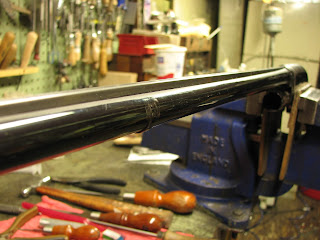 The rib was serrated by hand.  The guide lines were scribed .025" apart, using a height gauge and surface plate and then deepened using a carbide single-line checkering tool.  The two outermost serrations were cut twice as deep, using a purpose-made cutter, in order to "frame" the serrations. 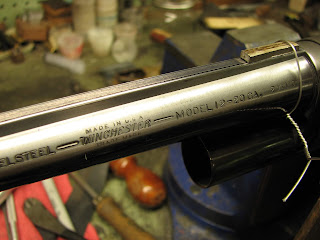 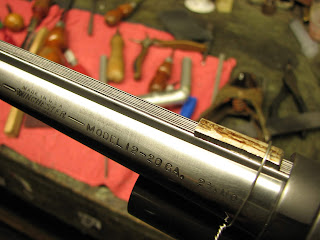 The next step was to tin the barrel and underside of the rib.  After cleaning all traces of corrosive flux, the rib was clamped in place and soldered down permanently.   Once all of the rosin residue was cleaned, the excess solder was cleaned up, the hole for the sight bead drilled and tapped and then all was reassembled for return shipping 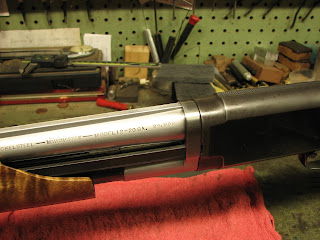 The soon-to-be #006 goes "under the knife" (or gets "ruined", depending upon one's point of view).  It started as a Philly-made Sterlingworth ejector in 16 gauge.  Actually, at this time, almost nothing remains of this gun as it was.  This may be the most radical alteration of a Fox that I've ever done and will incorporate an idea that I've had in the back of my mind for quite a while.  The client's inspiration for the gun was the Beretta Serpentina, which meshed very well with the plan that I had been pondering for so long.  Once I get some time to get the photos in order and type it up, I'll post it up.  In the interim, here are a couple of "before" photos. 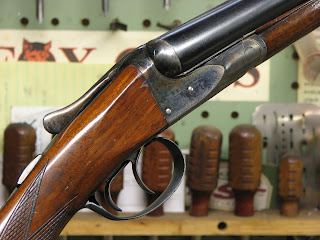 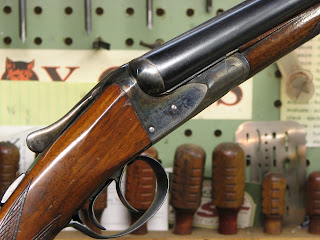