Best News of the Year?

Email ThisBlogThis!Share to TwitterShare to FacebookShare to Pinterest
Labels: Elephants and Ivory, Rants and Ravings

A Truly Noble Cause

These guys hunt quarry that actually shoots back and they do it in defense of those that can not defend themselves.  This is conservation, not the twisted idea that "legally" killing endangered animals somehow helps them.  Even more twisted is the "logic" that an animal must have an economic value attached to it to be worthy of saving.  The fact (baffling though it is) that certain (in fact, useless to humans) parts of these animals' anatomy have an economic value is the very reason for the poaching.  I've heard all of the self-ennobling bullshit stories about how hunting "fees" help the community and how the meat from the slaughtered animals feeds the people who otherwise would have none, yadda, yadda.  The fact is that trophy hunters would still kill the animal whether the meat went to use or not, and those "fees" mostly go to line the pockets of corrupt officials.   I have no issue with the ethical hunting of non-endangered species but I find little ethical about trophy hunting species that are critically endangered and intelligent.  The idea of looking upon a great bull elephant and thinking "What a magnificent creature, I must kill it" is as incomprehensible to me as it is indefensible.

Behold the faces of true bravery, men who clearly are able to appreciate majesty without wanting to either kill it or possess it.

Email ThisBlogThis!Share to TwitterShare to FacebookShare to Pinterest
Labels: Elephants and Ivory, Rants and Ravings

Here is a Horsley SLE that has been the recipient of some gunsmithing in the past.  Unfortunately, it was done by an individual with less than complete comprehension of the design's idiosyncrasies.  The stock had been refinished and for reasons unknown, the portion of the inletting that retains the striker bushings was removed from the right side.  This gun's striker bushings simply slip into the frame from the rear and depend upon the stock and the very inside edge of the lockplate to retain them.  The striker bores are also machined at an upward angle, meaning that the rear face of the bushings have an angled surface.  This presents no issues as long as they are prevented from rotating, which is precisely the reason for the contact with the stock and lockplates.  The stock also suffered from cracked upper horns, oil soaking at the head and someone had at one time placed a cardboard shim above the triggerbox.  This was done, presumably, so that the breechscrew would index correctly.
With nothing left to prevent the right-side striker bushing from rotating and floating back and forth, repeated blows from the hammer caused the striker to become quite deformed.  It comes as no surprise that the lockplate screw slots were also damaged.

The strikers, the bent right striker had to be cut in half to remove it from its bushing. 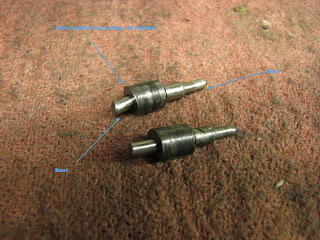 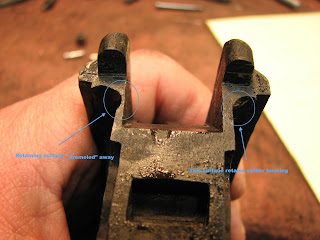 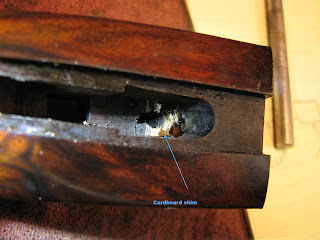 Once the finish is stripped from the head area and the soaked oil is removed, the stock repairs could begin.  As always, the repairs are performed by replacing bad/damaged wood with new, not "glass bedding" bodgery. 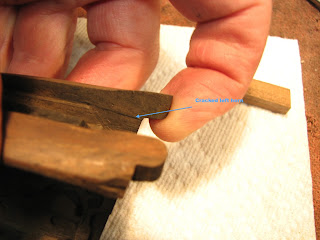 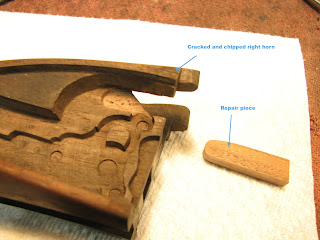 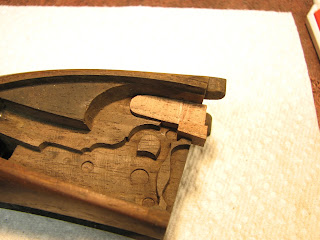 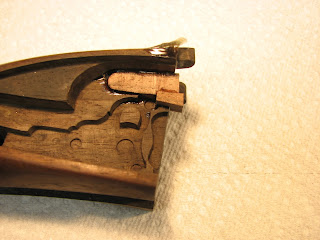 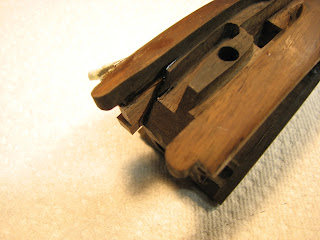 The repair after fitting 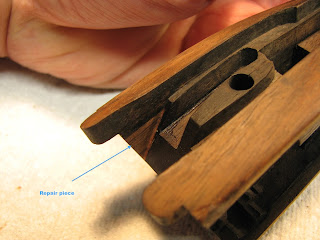 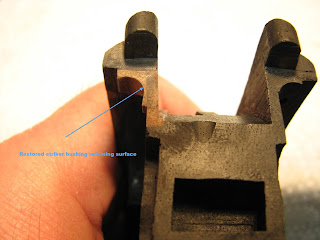 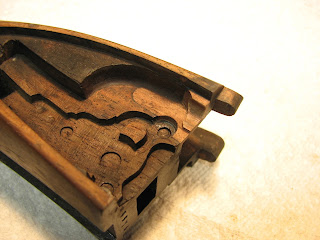 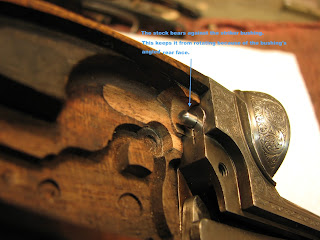 The lockplate screws were made in the usual fashion. 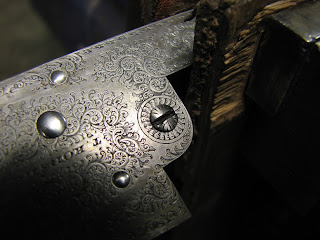 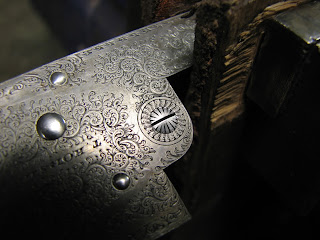 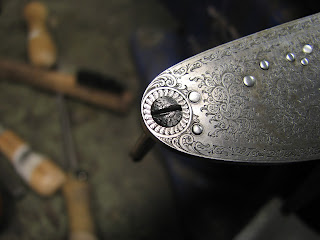 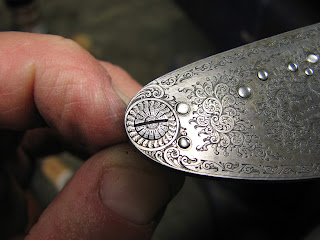 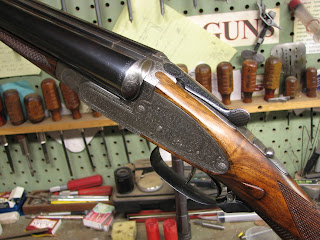