What do those things have to do with the gun world, you ask?  Well, the answer is simple: Like certain things in the gun world, they don't exist, yet people swear that they have seen them.

This is because there is not now, nor has there ever been, an industry standard for frame sizes of any gauge, for any break-action gun.  There have been manufacturers that have made use of different frame sizes for different gauges but in the case of American makers, usually there was one size.  Often, the only difference between a 12 gauge and a smaller-bore frame was the bore-center spacing and the corresponding size of the fences, with the actual bar of the frame remaining the same size.  These are not small frames because the entire frame was not scaled down proportionately for the smaller-gauge applications.

The standout exception to the above rule is that of Fox guns.  Fox made two frame sizes (not counting the Super): large and small. The large frames were all twelves, while the sixteens and twenties shared the same small frame, which was scaled down in all dimensions.  Some owners of Fox sixteens will brag to all who will listen that their guns are really built on "20-gauge" frames, because a well-known gunwriter once wrote this entirely subjective opinion in his book on the Fox.  If that's what they want to believe, more power to them but it doesn't make it true.  It could just as easily, and no less accurately, be said that the Fox twenty is built on a sixteen gauge frame but no one will ever say that because it doesn't sound "cool".  Where the Fox is concerned, there are twelves and small frames, period.

Where a manufacturer actually does make a frame that is specifically scaled to each caliber, things are still not definitive, because one maker's idea of a scaled frame may not be the same as another maker's, for the same caliber.

Another entertaining (or annoying, depending upon one's mood) bit of nonsense is hearing descriptions of the "grade" of walnut that a gun wears.  One will hear terms like AA, AAA, AAAA, Triple X, Exhibition-grade, ad nauseum.  This is also high-grade hogwash for the same reason.  There is no industry standard for grading wood.  Anyone can call any piece of walnut anything that they want, it's completely subjective.

Some more "pulled-from-the-ass wisdom" is that if a shotgun's barrels don't actually meet at  the muzzle, then they have definitively been cut.  The rationale behind this is usually along the line of  "the factory wouldn't let something like that go out the door".  Yeah, OK.  Those that subscribe to this line of thinking would literally not believe some of the examples of factory-original misalignment of barrels that I've seen on American doubles.  Here's a of photo of something that, according to some, would never have left the factory.  Unlike those grainy Loch Ness Monster photos, this is actually real. 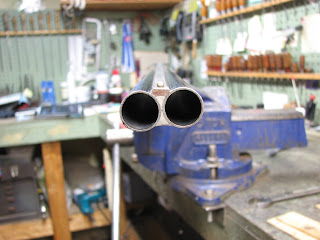 Colt's "open top" percussion revolvers, regardless of caliber, are all basically the same design: a frame with no top strap and completely open at the front.  Think of an "L" laid over on its long leg with the short leg being the rear of the frame.  The spindle upon which the cylinder rotates is screwed into the rear of the frame and its front end extends some distance beyond the front of the cylinder.  The barrel's structure serves as the forward portion of the frame and is located in part by the extended portion of the cylinder spindle.  This extended portion of the spindle is pierced by a horizontally oriented rectangular slot, which aligns with a mating slot in the barrel, and receives the barrel wedge which holds the whole works together.

With the barrel secured axially to the frame about the cylinder's axis, some method is needed to prevent the barrel from simply rotating about the cylinder spindle, and to establish and maintain the bore's alignment with each of the cylinder's chambers.  This is accomplished by the use of two locating pins on the forward end of the frame, that engage mating holes in the rear of the lower structure of the barrel, where it mates with the frame.  Those pins are the subject at hand, as they were both broken away on the subject gun.

The barrel locating pins are actually not pins at all, at least not as originally manufactured.  The locating "pins" are actually machined as part of the frame and breakage of these locators isn't an unheard of event.

Abrupt section changes and sharp inside corners are best avoided, if possible, in any design.  Colt's barrel locating method exhibits both: the section change from the frame bar to the locators, and, the sharp inside edge formed where the locator meets the frame bar.  That said, the most common contributors to the breakage of these locators are ham-fisted disassembly and worn, loose-fitting barrel wedges which allow the barrel assembly to "float" on the frame assembly, abnormally stressing the locators.

There are two possible methods for repairing this damage.  One method would be to anneal the case-hardened frame, weld up enough material to remachine the locators, then polish, prep and reharden the frame.  This method would be rejected for the following reasons: The new pins, even after rehardening, would not be as sound as the originals because the originals were machined from the frame's forging and the built-up pins would effectively be castings (welding is really nothing more than casting in-place).  The second reason is that welding would destroy the original finish, or patina, whichever the case may be.  This is generally unacceptable to Colt collectors.

The second method would be to drill the frame to accept new tool steel pins.  This would be done after fixturing the frame in the mill and establishing the center of each of the locators.  The new pins are made .001" over the size of the holes in the frame.  Before installation, the pins are frozen and the frame is heated to between 250 and 300 degrees (Farenheit), the pins are then pressed into the frame and when the temperatures equalize, the pins aren't going anywhere any time soon.  The pins are then machined to the proper height and their ends are radiused.

In the first photo, it is obvious how close the outside diameter of the locator is to the edge of the frame's upper surface.  This precludes drilling the holes to the full diameter of the pins.  The solution is to make the pins "stepped" with the smaller diameter inside the frame.  The step in the new pins is actually a short taper that matches the taper of the counterbore in the holes that are machined into the frame.  This is a royal pain to machine but it minimizes the stress concentration where the diameter changes.  Is it absolutely necessary?  Probably not, but it makes me feel better. 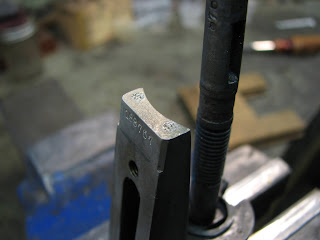 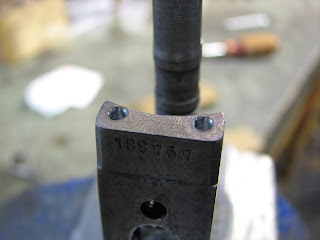 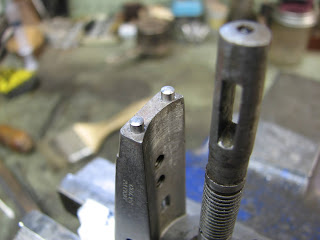 The gun was also missing the front triggerguard screw.  A new screw was made and finished, then the finished was "worn" to match with the rest of the screws. 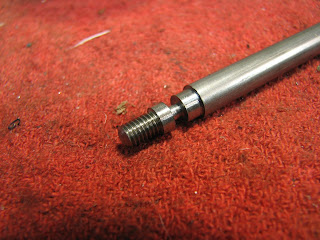 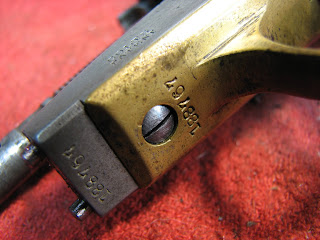