It's interesting because it has rifle-style bolsters on the frame, but it has shotgun barrels.  It also has quite a bit of drop and a manual safety.  German doubles with rifle and shotgun barrel sets are not unheard of, Sauer and Merkel made quite a few.  Maybe there is a set of rifle barrels for it somewhere, who knows?  In any event, it needed to be cleaned, a new left-side mainspring had to be made and the sear engagement needed to be corrected.

Here is the broken spring with the finished replacement.  I've detailed making springs elsewhere in this blog and so I won't get into it here. 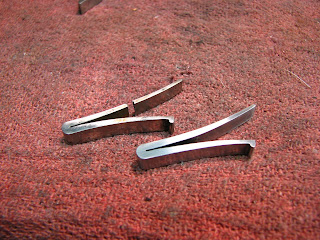 There seems to be some confusion among some about which sear does what in a Daly (or most other German) boxlock that is equipped with interceptors.  For the record, in an interceptor-equipped Daly boxlock, the BOTTOM sear is the MAIN sear (in standard Anson & Deeley fashion), while the overhead sear acts as the interceptor.  The following photos show the internal parts and also clearly shown is the hammer held in the cocked position while the overhead sear is free to move and catch the hammer, should the main sear slip.  The geometry is such that the overhead safety sear is moved clear of the hammer by the trigger blade before the main sear releases. 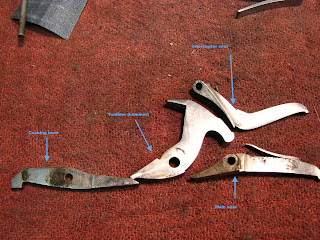 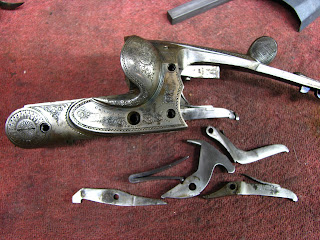 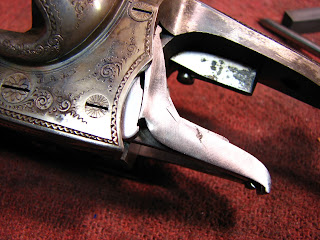 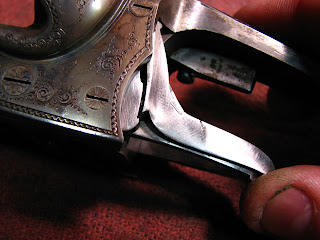 Finished up and ready for some more use. 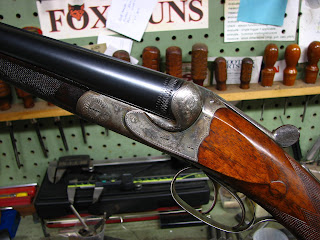 Email ThisBlogThis!Share to TwitterShare to FacebookShare to Pinterest
Labels: European

A Leather Covered Pad for a Parker Repro

Here is a 12 gauge Parker reproduction that was a bit short for its owner.  He opted for a Silver's pad, with spur, and wanted it leather covered.  There were also numerous dings and scratches in the wood that needed repair, so the butt and forend were also refinished.  It's no secret that I think pretty highly of the reproductions but they do have a few aesthetic shortcomings, such as a wood finish that rivals the finest assemble-it-yourself furniture, a wrist that is slightly tapered to the thumbhole (not much can be done about that) and the curvature of the heel is far too great.  Here, I've corrected the first and third issues.

Due to the small amount that the stock was shortened, combined with the width of the spur of the original buttplate, the resulting spur inletting necessarily had to be a bit larger than the spur that is supplied on the Silver's pad.  This was corrected by building up the spur with epoxy.  Since the pad was being covered, I didn't bother dying the epoxy.  At this point, the pad has been fit and its periphery reduced by the thickness of the hide. 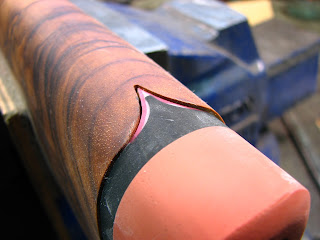 Here is the pad, covered.  The leather is still "in the white", meaning that it has not yet been dyed.  The wood appears much darker than it really is, due to the lighting and camera setting. 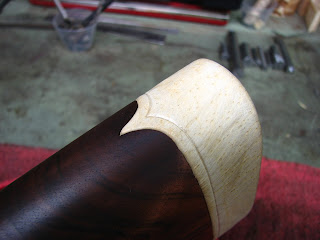 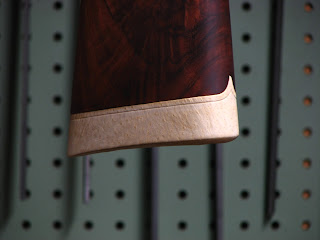 This shot more accurately shows the color of the wood. 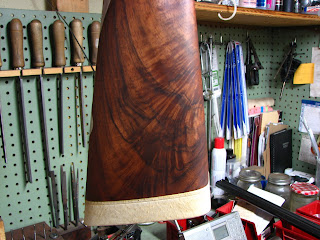 Here is the finished job.  I also made, engraved and finished a new breechscrew because the original did not index properly when tight. 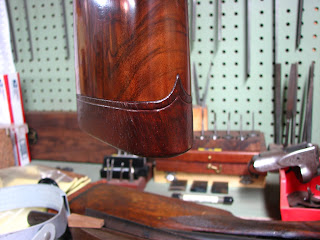 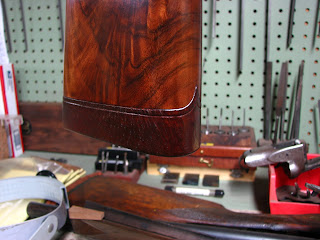 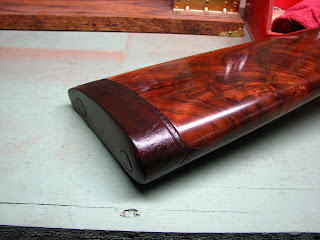 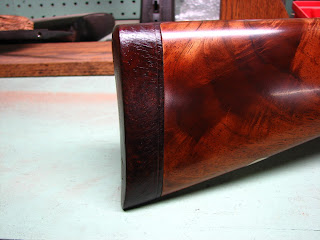 These photos illustrate the curvature of the heel that I mentioned earlier.   The repro buttplate is a stamping (the originals are a machined forging) and the exposed checkered portion of the wood is a separate piece, glued on. 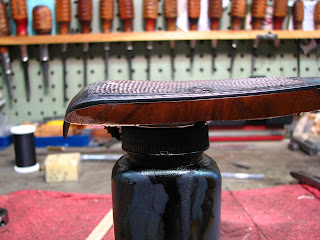 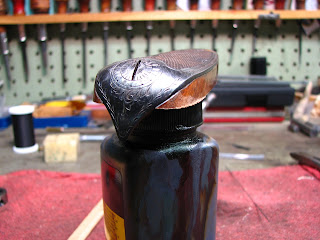