Here we have one that doesn't show up every day.  It's a Stephen Grant side pedal gun with lockwork designed and made to the Grant and Adams Patent #2101 of 1883.  In operation, both tumblers cock on opening of the barrels but what is different is that only the right mainspring compresses.  The left mainspring compresses upon closing the barrels, thus making the opening and closing effort exactly the same.  It is commonly believed that this is a self-opening or an easy opening design.  It is most assuredly NOT a self-opener and, since the opening effort is the same as the closing effort, it's not an "easy-opener".  I won't even get into the fact that there is no such thing as an "easy-opener".  This is not the only gun to employ the concept of equal effort for opening and closing, the first Holland & Holland Royal (Holland and Robertson's patent #23, of the same year) was designed to operate in such a way, though it was mechanically quite different and cocked one tumbler on opening, while the opposite tumbler cocked on closing the barrels.  The effect was the same.

Those pads in the action bar that look like the "lifters" in a Beesley-type gun are not actually lifters.  The engage the eccentrics at the front of the mainspring housings on each lock.  Also note that there are no interceptors.  The locks were sourced from Stanton's. 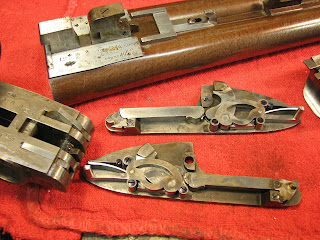