This revolver started life as a 6-inch, pencil barrel, fixed sight, square butt.  It's been modified into a 3-inch, heavy barrel, adjustable sight revolver for IDPA "Back Up Gun" class competition.

The heavy barrel that was used was from a 4-inch model.   I cut and crowned the barrel and after fitting it to the frame and establishing the front gauge (after aligning the crane and setting the rear gauge), a new forcing cone was cut.  The problem with fitting a heavy barrel to a pencil barrel frame is that the frame lacks the ribbed front portion that mates to the rib of the heavy barrel.  To correct this, I machined a portion of the heavy barrel rib away, leaving the barrel round where it interfaces with the frame.  The original rib was left at the forward portion of the barrel to serve as a front sight base.  A dovetail was machined for the front sight.  The frame was machined to accept a factory adjustable rear sight and the sight was contoured to match the frame.  The balance of the work consisted of: chamfering and numbering the chambers, smoothing the action (7 lb. DA), installing an overtravel stop and making the fiber-optic front sight.  The cylinder latch thumbpiece was undercut for speedloader clearance and the frame was converted to round butt configutation.  Finally, everything except the hammer and trigger were slow rust blued.  I don't know whose make the grips are as the client supplied them.

Here are the photos. 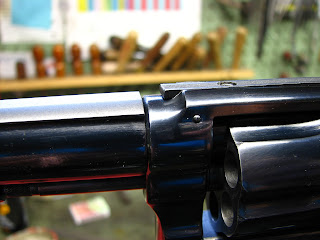 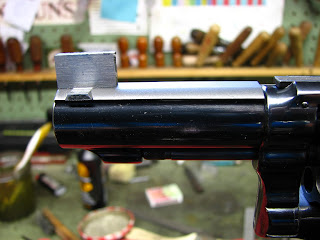 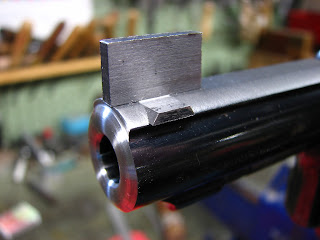 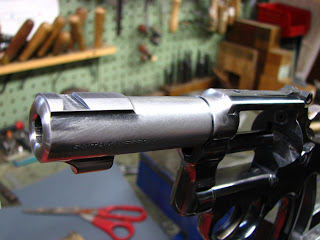 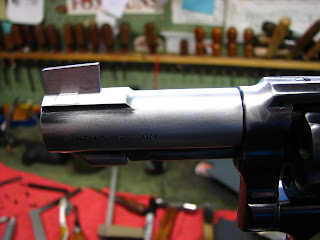 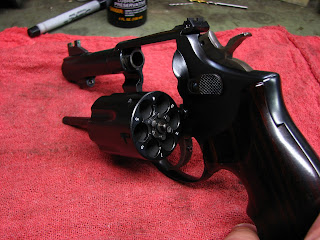 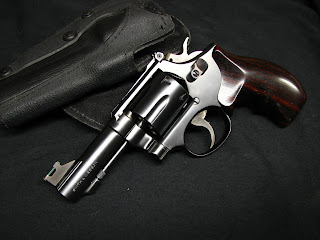 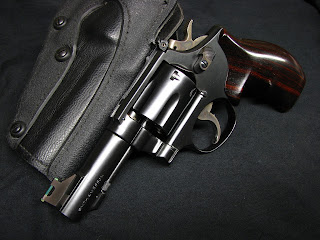