The left lock was cocked but the tumbler would not fall.  This usually indicates either a broken mainspring or a broken swivel.  If I could pick one, I'd prefer that the mainspring be broken because in that case, there would be no pressure on it.  A broken swivel however, that's a different story, because when the swivel fails it leaves the mainspring unrestrained inside the inletting but still considerably compressed.  This makes removal of the lock without damaging the wood extremely difficult.  There is no way around it because a sidelock gun absolutely can not be disassembled without first removing the lockplates.  The best you can do is to slowly work the lockplate away from the stock until there is enough room to reach under the plate itself with a blade-type tool and try to hold the mainspring clear of the wood until the plate is out.  This sounds much easier than it actually is.  I managed to remove the lock while causing only a minor chip in the exposed wood.

The failed part.  Swivels are small but are one of the most time-consuming of parts to make and fit because the "pin" ends are integral to the web and they must be absolutely round and concentric from one side to the other for longest service life. 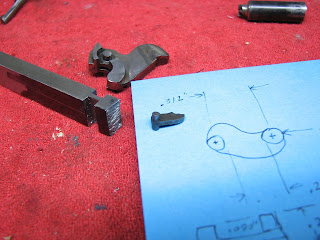 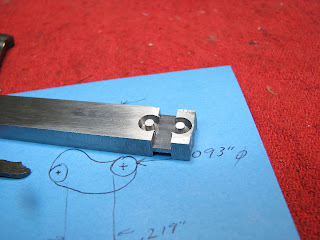 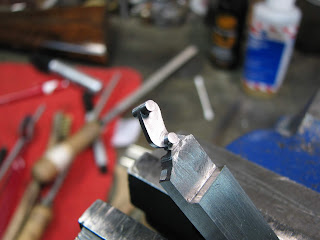 Most factory swivels are hand filed and the roundness and concentricity of the pins are often, shall we say, less than perfect.  The thickness of the web is also often times thinner (and therefore weaker) than it needs to be.  I always make the web of a swivel as thick as it can be while still being able to move freely in its slot, as well as "breaking" all sharp edges in order to minimize stress concentrations.  This also is the reason that such a small part also gets polished on every surface.  I make them from O1 and heat treat them to Rc 48-51. 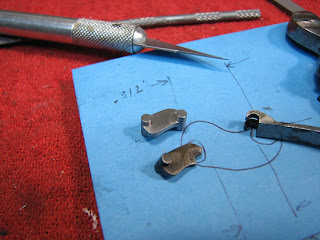 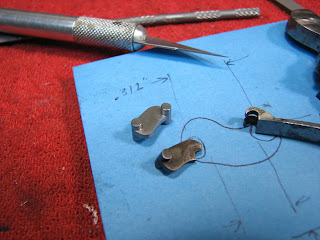 The left lock, cleaned and reassembled.  Looking at the lower photo, it becomes readily apparent how a failed swivel will complicate removal of the lockplate. 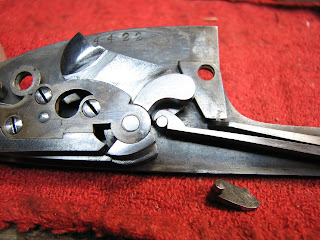 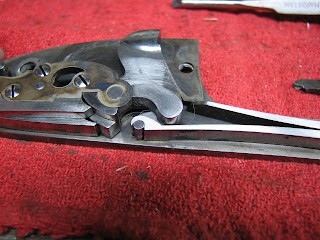 Repairng the chip in the stock caused by removal of the lockplate is next. 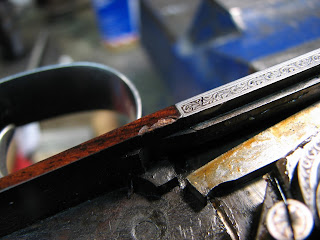 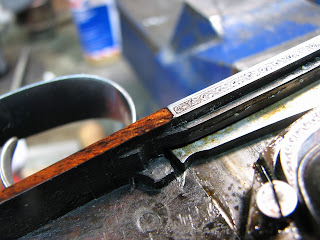 In addition to the swivel repair, the gun was completely stripped and cleaned and a couple of dents were removed from the barrels.  The finished job. 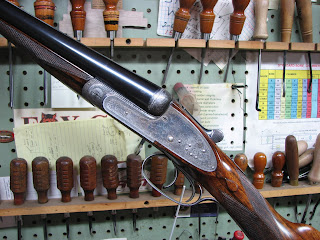 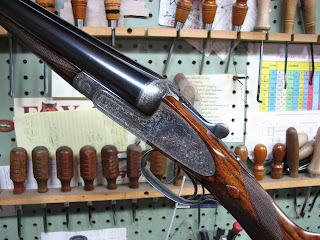