I came across some photos of a custom Fox Sterlingworth that I made a long time ago.  It was a 1913-vintage Philadelphia gun that had had a pretty rough paper route, but the bores were mint and it was tight on face, so I decided to make it into something a bit nicer.  After I annealed the case-hardened parts and consigned the wood to the scrap pile I went to work with the hammer and chisels.  Obviously, I didn't go the "standard custom Fox" route and file the fancy-back into the frame.  I wanted to do something a bit different, hence the false sideplates.  I know, false sideplates on a boxlock gun aren't all that uncommon but these are not simply ornamental.  I incorporated Scott-style crystal cocking indicators, which are glass windows through which the tumbler shows when the gun is cocked.  The hitch is that the tumblers in a fox don't protrude beyond the rear edge of the frame when the gun is cocked, but the indicator windows are well behind the rear of the frame.  Each sideplate contains a spring-loaded, gold plated "false tumbler" that, due to the geometry of its pivot, parallels the movement of the actual tumbler.  I also modified the hinge pin area to mimic the early Sterlingworth "pin guns", fabricated a new triggerguard, toplever, safety slide, screws, etc.  I stocked it in a georgeous piece of English walnut and had Ken Hurst engrave it before I did the metal finishing.  I did this gun long before this blog existed and I don't have too many construction photos.

Here is the actual gun as I got it. 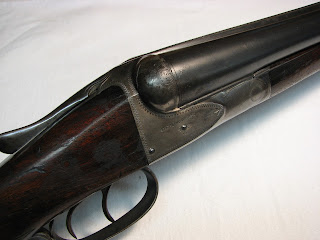 These are the "after" photos. 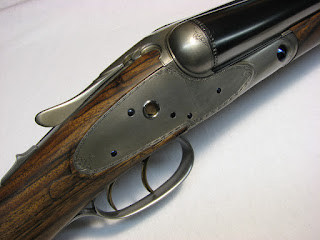 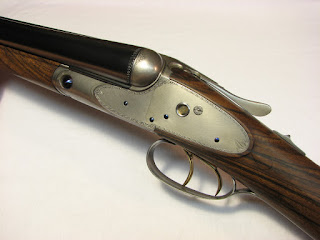 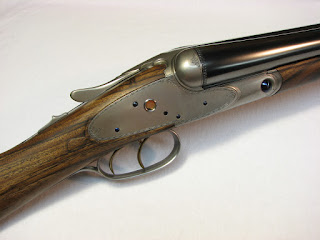 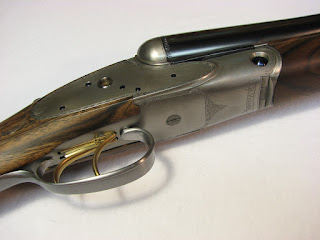 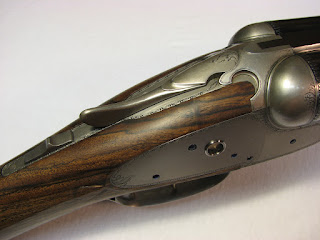 Here's a close up of fence area. 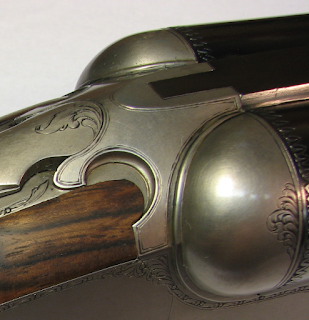 Here's a video of the cocking indicators' function.